What is an artificial pacemaker?

Why do I need one? Your doctor may recommend an artificial pacemaker to make your heart beat more regularly if:

How does it work? 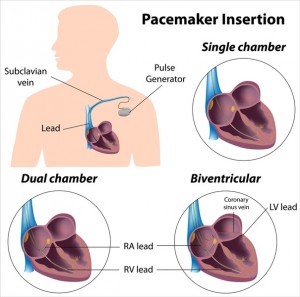 The sinoatrial (SA) node or sinus node is the heart’s natural pacemaker. It’s a small mass of specialized cells in the top of the right atrium (upper chamber of the heart). It produces the electrical impulses that cause your heart to beat.

A chamber of the heart contracts when an electrical impulse or signal moves across it. For the heart to beat properly, the signal must travel down a specific path to reach the ventricles (the heart’s lower chambers).

When the natural pacemaker is defective, the heartbeat may be too fast, too slow or irregular.

Rhythm problems also can occur because of a blockage of your heart’s electrical pathways.

The artificial pacemaker’s pulse generator sends electrical impulses to the heart to help it pump properly. An electrode is placed next to the heart wall and small electrical charges travel through the wire to the heart.

If you have an artificial pacemaker, be aware of your surroundings and the devices that may interfere with pulse generators:

Several of these devices have a remote potential to cause interference by occasionally inhibiting a single beat. However, most people can continue to use these devices without significant worry about damage or interference with their pacemakers.

Power-generating equipment, arc welding equipment and powerful magnets (as in medical devices, heavy equipment or motors) can inhibit pulse generators. Patients who work with or near such equipment should know that their pacemakers may not work properly in those conditions.

Cellphones available in the United States (less than 3 watts) don’t seem to damage pulse generators or affect how the pacemaker works.

Carry a wallet Pacemaker ID card with you. Equipment used by doctors and dentists can affect your pacemaker, so tell them you have one.

Magnetic Resonance imaging (MRI) uses a powerful magnet to produce images of internal organs and functions. Metal objects are attracted to the magnet and are normally not allowed near MRI machines. The magnet can interrupt the pacing and inhibit the output of pacemakers. If MRI must be done, the pacemaker output in some models can be reprogrammed. Discuss with your doctor the possible risks and benefits before you undergo MRI scanning.

Extracorporeal shock-wave lithotripsy (ESWL) is a noninvasive treatment that uses hydraulic shocks to dissolve kidney stones. This procedure is safe for most pacemaker patients, with some reprogramming of the pacing. You’ll need careful follow-up after the procedure and for several months to be sure your unit is working properly. Patients with certain kinds of pacemakers implanted in the abdomen should avoid ESWL. Discuss your specific case with your doctor before and after the treatment.

Radiofrequency (RF) ablation uses radio waves to manage a wide variety of arrhythmias. Recent studies of patients with implanted pacing systems measured the units before, during and after RF catheter ablation. They showed that most permanent pacemakers aren’t adversely affected by radio frequencies during catheter ablation. A variety of changes in your pacemaker can occur during and after the treatment. Your doctor should carefully evaluate your pacing system after the procedure.

Transcutaneous electrical nerve stimulation (TENS) is used to relieve acute or chronic pain. Several electrodes are placed on the skin and connected to a pulse generator. Most studies have shown that TENS rarely inhibits bipolar pacing. It may sometimes briefly inhibit unipolar pacing. This can be treated by reprogramming the pulse generator.

Diagnostic radiation (such as screening X-ray) appears to have no effect on pacemaker pulse generators. However, therapeutic radiation (such as for treating cancerous tumors) may damage the pacemaker’s circuits. The degree of damage is unpredictable and may vary with different systems. But the risk is significant and builds up as the radiation dose increases. The American Heart Association recommends that the pacemaker be shielded as much as possible, and moved if it lies directly in the radiation field. If you depend on your pacemaker for normal heart pacing, the electrocardiogram (ECG) should be monitored during the treatment, and your pulse generator should be tested often after and between radiation sessions.

Dental equipment doesn’t appear to affect pacemakers adversely. Some patients may feel an increase in pacing rates during dental drilling.

Electroconvulsive therapy (such as for certain mental disorders) appears to be safely used in patients with pacemakers.

Short-wave or microwave diathermy uses high-frequency, high-intensity signals. These may bypass your pacemaker’s noise protection and interfere with or permanently damage the pulse generator.