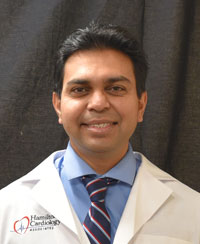 Dr. Patel stayed back at Rutgers Robert Wood Johnson Medical School to complete his fellowship training in Cardiovascular Disease. He acquired breadth of training in all aspects of Cardiovascular Disease, Echocardiography, Stress testing, Nuclear Cardiology, Vascular Ultrasound and Cardiac Catheterization. He was highly regarded among his peers and received the Outstanding Fellow Award and Excellence in Teaching Award in 2012-2013.

Dr. Patel has been a practicing Cardiologist since 2015. He has been an Attending Physician at Rutgers Robert Wood Johnson Medical School, St. Peter’s University Hospital and Penn Medicine at Princeton Medical Center. He enjoys teaching residents and fellows in training. He was selected as Fellow of American College of Cardiology in 2017. He has been awarded as America’s Top Cardiologist for three consecutive years – 2016, 2017 and 2018.